The products of 1512 Spirits do not want for praise, and certainly not around these parts.  With the passage of time since the release of their non-aged Barbershop Rye a few years past, a few developments have occurred.  Firstly, the non-aged rye was not a one-off novelty.  Subsequent releases have followed and some in larger bottles (I am still an inveterate fan of the original, smaller bottles, but that is just my style).  More importantly, and in keeping very much in the tradition I would expect from the spirit’s crafter, Salvatore Cimino, there has been no attempt to replicate the original flavor and milk a successful recipe: the core approach to production and elements of the signature are recognizable but subtle, purposeful shifts have occurred, elevating the art incrementally.  The same can be said for 1512’s aged rye, as well.  This follow-up to the white spirit, the original release of the aged rye imparted a fine amber hue and and lush twists on the base spirit.  In particular, Mr. Cimino’s eau-de-vie pedigree and penchant for creating a singularly impressive dryness in his spirits permits one to appreciate the sweeter as well as the subdued aspects of a pour.  Instead of a saturated, pervasive sweetness, one appreciates the juxtaposition of sweet, floral, grain, and water-and-barrel elements and the finer complexities resulting from the interplay between.  And it is the mesmerizing dryness that stages the proper backdrop for truly connecting with these details.  Much like the un-aged rye, successive releases of the aged version have retained the core sensibilities while finding room for greater expression.

Also of importance concerning the aged version is that it showed to the whisky-savoring populace that 1512 Spirits was no one-trick pony and Mr. Cimino no mere white-dog savant, something I deduced early on from conversations over unreleased spirits, all of which were superlative.  As if to draw attention to the variability of the deft hands at work at 1512, the ryes have since been followed up with a poitin, a rum, and a wheat whisky.  Frankly, the outdated dogma of the vocabulary for tasty notes would only serve to damn the flavors of the spirits with hackneyed, diluted vagaries.  It is the subtleties and interplay of elements imbued with a sense of purity and focus the necessitate drinking the spirits to get a just sense of the flavor.  And I do not write that simply to avoid delving into the myriad details and dimensions of the line-up.  Until you have actually tried a few pours of 1512’s spirits, we will lack a common vocabulary with which to accurately engage in descriptions more revealing that base platitudes.  That being said, I must coquettishly tease with a few remarks.  The poitin, a traditional Irish potato-based whisky, was resurrected in Mr. Cimino’s crypt with intriguing expressions of starches that are borderline-unique, and curiously satisfying.  The rum is almost entirely unlike the rums one is used to because it actually tastes like a finely detailed concoction with depth and intrigue, not simply glorified sugar. And while I thought it would have been a crime to cast the well-wrought flavors of such a spirit into the oubliette of a cocktail, I was happily proven wrong when I was served the best Old Cuban I had ever imbibed, the rum suffering not a wit and the cocktail benefiting greatly.  Needless to say, the wheat whisky is not simply the rye with a last minute substitution.  The flavor of the whisky favors the wheat in a manner that no doubt required a ground-up approach to engender a recipe that takes into account the difference in the grain and it’s idiosyncrasies. And it tastes good.

While this article may appear as one in a hopefully long line of laudatory expressions of my experience with 1512 Spirits’ products, I see no reason to praise it any less when I only ever drink it more.  The line-up continues to reflect the character of their maker, a man of strong opinions held and delivered without doubt… but always with knowledge, belief, and a distinctively bold shade of grace.  –Nate

This whisky is 1512 Spirits’ first public release since their Barbershop Rye white whisky found its way onto the shelves of discerning drinkers fortunate enough to know about this artisanal brand.  Frankly, my writing concerning 1512’s white whisky was deservedly laudatory.  Salvatore Cimino’s skills and unwavering dedication to his art demand respect.  The demand, however, is unnecessary because I and anyone I share his whisky with offer up our respect willingly.

Batch 1 of the aged rye is the latest contender from Mr. Cimino’s cloistered operation and, not surprisingly, it is unmatched.  You will know it by its color.  Unlike the white whisky gauntlet 1512 threw down in times past, the aged edition has the patina of an aged whisky.  And while the aging process was minute by whisky standard, it was precisely the time needed to achieve Mr. Cimino’s goal of creating an unparalleled whisky not by chance, but by purposeful design.  I can write of the vanilla and warm sugars, the bright-but-not-hot flavors, the stunningly signature dry, crisp body of this whisky and I would only be scratching the surface.  Unlike many whiskies, many good whiskies, without actually trying this release, it is hard to get your head around the stand-out aspects of this whisky.  So tasting notes do not really communicate an accurate description of the experience unless you have tried a whisky of this particular caliber and craft.  This is because the taste of most whiskies do not readily convey the old-world skill, artistry, and dedication palpable in 1512 Spirits’ products, and this latest batch in particular.  There are many craft distillers in the marketplace and some of them are making noble efforts in bringing to people’s attention the importance of hands-on, traditional approaches to whisky that have too long been obscured by mass producers of good and bad whiskies more readily available.  But not all distiller’s can express the almost-unbalanced degree of enthusiasm and self-discipline necessary to bend the labors of an a still to their will.  Or take the time to concoct a mash that relies upon the distillation process to enhance characteristics and bring them to bloom, instead of concealing weaknesses in booziness of mediocrity.

There were only 180 bottles of Batch 1 produced.  Even with the minimal aging involved, some very lucky angels absconded with a respectable share of this whisky.  The bad news for you is that I am about three months behind on this article, so many of those bottle have been snapped up. So concerning shops local to San Francisco that 1512 Spirits’ products are usually available for sale at, Royal Liquors (sold out of the Aged Rye, and I am partially to blame), Healthy Spirits (still in stock), Cask (sold out, but they have the new larger version of the Barbershop Rye), and K&L (still available).

Naturally, new releases are slated sooner and later this year.  I am particularly excited about Mr. Cimino’s take on a potcheen (a traditional Irish whisky) which is rumored to already be out, as well as another batch of aged rye.  And in all honesty, I expect these new releases will surpass 1512 Spirits’ prior and current efforts at producing superior liquor. I praise Mr. Cimino’s contribution to whisky and resurrection of a craftsman’s ethic with a glass of his aged rye (batch 1), a glass from my all-too-rapidly depleted stores. –Nate 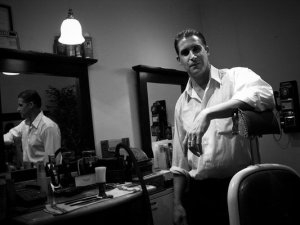 The reason that 1512 Barbershop Rye is a superlative expression of a distilled spirit is quite simple, Salvatore Cimino made it that way.  Mr. Cimino is a man who dispels the illusion, if you held such an illusion, that great recipes for a distilled spirit are the result of fluke chance.  Yes, it is possible to stumble upon something special, but it is unlikely, and in the case of 1512’s Rye, little was left up to chance.  The consummate craft distiller, Mr. Cimino produces all of 1512’s spirits alone and by hand.  From hand-milled grain to the product of his alembic still, he controls the process with an intense dedication to every detail.  Intense dedication could describe many aspects of this craft distiller’s approach to his art.  So could artist, for that matter.

Mr. Cimino’s approach to distilling has something in common with 1512 Rye’s palate, a journey with attention paid to the fundamentals necessary to create a total experience, not merely an ephemeral moment of pleasure.  Obviously, the level of detail Mr. Cimino shared with me concerning his process from beginning to bottle will not be recounted here (everyone is entitled to their secrets, respectable liquor-producers even more so), but a few broad strokes suffice to give one an idea of how little Mr. Cimino relies on the fickle inconstancies of chance.

A third generation of practitioners of the alcohol arts, Mr. Cimino was able to study under both his grandfather and father, both masters in their own right.  Building upon this foundation, he acquired an understanding of what creates a dynamic spirit by endeavoring to understand and control each ingredient or phase of the product.  Water is analyzed to account for its mineral content.  Grain is milled by hand to control the speed concomitant temperature.  You get the idea.

Mr. Cimino’s belief in the importance of the making of one’s mash cannot be overstated.  It was impressed upon that if you have not worked out a solid product by then, why even waste your time with the still? I believe this is in keeping with his comment that a distiller is more appropriately described as a chef of grain, such is the weight placed upon the creation of a good mash.  And the process doesn’t lighten up.  The type of still, the time in the still, the ambient atmosphere on a given day.  I am not being flip when I write that I believe that if Mr. Cimino had his own cork trees, he would find out the impact of variations in the trees and factor that in to the overall process of cultivating a specific palate.  So it is with this level of intense dedication that he can produce a white whiskey that is not only palatable, but complex with novel (and valuable) dimensions.

While many opine on the right number of years to age a whiskey, Mr. Cimino questions the utility of aging a whiskey that is not already a solid and presentable product before you go and wake the cooper up.  And I confess it makes sense to me.  Why conceal a harsh, one-dimensional new-make in lays of sugar and cords of oak in an attempt to make something palatable?  Perhaps one should figure out why their white whiskey does not already taste great before attempting to enhance (through sugar, char, and wood) the admittedly flawed spirit.

So I can only wonder what 1512’s Rye would taste like were it aged for any time in a barrel.  But frankly, I do not spend much time wondering because it already tastes excellent with a profile that does not rely on sugar or char, but instead leads one through a labyrinth of tightly-bound flavors and floral notes (hints of eau-de-vie), with the texture playing a prominent and dynamic role by allocating the flavors selectively instead of in one, haphazard burst.  And the gradual, not to mention singular, dryness that eventually settles over the palate sets a bar that shames many a mass-produced whiskey for their palate-wrecking sweetness.

With no intentions of involving additional people in his liquor-making processes (for fear of risking any compromise in a spirit he rightly assumes full credit for), it is lamentable that 1512 Rye will remain an obscure and wonderful thing.  Lamentable for you, that is, because the barbershop (he is, after all, a barber of over 25 years) is just down the street from me and I intend to shake him down for intelligence on every new batch, to buy a few bottles from each batch, and to promptly savor it.  Sometimes with friends. –Nate