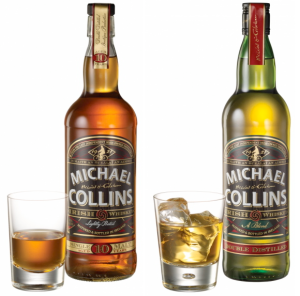 The “Big Guy” used to be, not sure if it is still is, the promotional moniker for the Michael Collins brand of Irish whiskey.  It was a little corny, so I hope it went away along with the big ugly bottles they used to have.  Michael Collins is distilled in the last independent Irish owned distillery – Cooley.  We did a review of a single cask Cooley last week.

My first run in with Michael Collins was far from impressive.  My buddy who runs a restaurant with a full bar brought over a 1L bottle of the Michael Collins blend that he was given as a “kick back” by his liquor distributor.  Free booze – who can complain right?  Well several months later with a 90% full bottle taking up space in my cabinet, I was complaining.  I couldn’t give it away and I certainly wasn’t drinking any more of it.  It just didn’t fit into my drinking rotation.  I’d prefer something more interesting and flavorful if I wanted a whisk(e)y and I would rather grab an easy drinking beer if I wanted something less challenging to relax with.  Tragically I think I ended up throwing the bottle out when I moved out of that house.

But several years later I found myself picking up another bottle of the Big Guy – this time the 10 year old lightly peated single malt expression.  I decided to give Michael Collins another try, rationalizing that the blend I had before was not representative of his whole body of work.    Luckily it was a vast improvement over the blend in my opinion.

Comments:  It does a great job of balancing the peat and the sweetness of the spirit.  I found myself using “subtle” to describe this whiskey a lot and I guess that is how to best sum it up – subtle, but nicely balanced and integrated.  – Chris

It is rare to find a single cask expression of an Irish whiskey.  Luckily for me AD Rattray, an independent bottler that I really like, was able to secure a cask from the Cooley distillery.  Cooley, a relatively new distillery, built in 1987, promotes the fact that it is the only independent distillery in Ireland.  Their single malt brands include Tyrconnel and Connemara and a single grain Greenore. – Chris

Palate: Initially soft then the flavors start to open up and attack the palate, the alcohol punch is quite strong, lots of grassy notes, fudge and chocolate, oak peaks out and is quite nice, a surprising touch of pepper, the youthfulness is still present – a little boozy, hints of cinnamon spice

Comments: a real treat to try a single cask, cask strength Irish whiskey.  An avalanche of flavors that I am not accustomed to from regular OB releases.  It is a challenging whiskey that is still a little raw and young but I really like it!